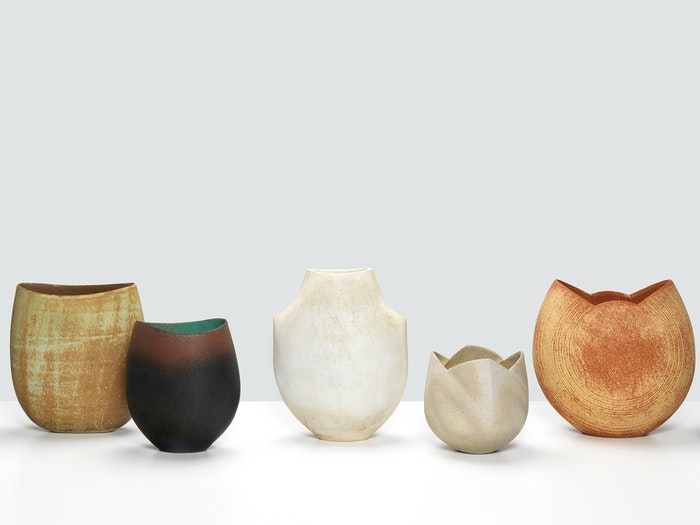 Born in London in 1938, Ward studied ceramics under Hans Coper and Lucie Rie at the Camberwell School of Arts and Crafts in London.  He established his first workshop in London in 1971 and spent several years working as a part-time potter and teacher.  Following his move to Pembrokeshire, Wales in 1979, he focused entirely on making ceramics.

Ward’s pots draw their greatest influences from ancient and modern sources, including early Cypriot and Persian bowls, and Chinese and Egyptian pre-glaze pottery, along with the work of Coper, Rie and Ian Godfrey.  They are distinguished for their understated yet sometimes complex structures often embellished with abstract and geometric patterns.  Ward has said, “my aim is to make pots which have simple forms with integral decoration and aspects which can interact with the environment in interesting ways; to try and express a balance between these dynamic qualities and a sense of stillness or containment.”

The beauty of the Welsh coastal landscape that surrounds Ward is echoed in his ceramics, intrinsic to their aesthetic identity.  “Being near the sea has probably had an effect on the banded decoration I use, either reflecting the movement of water and waves or the dips and folds of the strata revealed in cliff faces.”

The Victoria and Albert Museum in London, the Ashmolean Museum in Oxford and the Museum of Design in Zurich are among the public collections that represent his work.

“There is something compelling about the making of pots, regardless of function, which keeps me within the particular sphere; they are the focus of many interests and associations.”

All quotes by John Ward